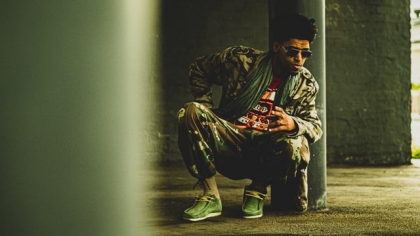 Mind you… We haven’t in recent years seen Jitsvinger wearing any snazzy sneakers or fancy dress shoes…
Daai bra dra mos net Graasies eksé.
The Graasies single and its recently released music video pay homage to the highly popular South African Grasshopper shoes that are worn across all generations and genders.
Welbekend vir sy liefde vir erfenis en kultuur, reflekteer Jitsvinger oudergewoonte op die straatkultuur van Kaapstad, en met Graasies besin hy oor hierdie ikoniese skoen en sy ervaring om dit te dra, die simboliek daarvan en die alledaagse verhale wat mense se herinneringe van die skoen ontlok.
Die skoene, wat deur baie generasies plaaslik bekend staan as 'Graasies', is al jare lank 'n ‘identuty marker’ in die fashion culture, by die werk en op skole.
Originally only available in black or brown with either suede or genuine leather uppers and a crepe rubber sole, Grasshoppers started expanding its colours to what were considered practical dark colours including Navy for medical staff.
Nou wiet djy hoekô is daai een bra se bynaam Nurse…
…but lately Grasshoppers can be bought in huge variety of fashionable colours.
The iconic Grasshopper shoe has in recent years become synonymous with the Afrikaaps Hip Hop artist Jitsvinger aka Quinton Goliath… of sommanet Jits. His social media often trends with him showing off his Graasies in a wide variety of shades and also the odd variation in styling and material.
It was always inevitable that Jits was going to mention his favourite shoes on a track, but lo and behold, he went and made a full-on tribute, an ode that with its overall tone evokes a classic ‘jazzanova” vibe; like a stripped down cross between slower Bossa Nova & the 1950’s Cool Jazz sound.
Jitsvinger’s multi-layered rhymes are woven together on top of this very old-school influenced instrument orchestration composed by Garth Soul together with Francios Afrika on keyboards and Chadley Beukes on bass, fusing some intricate classic jazz styles.
The bass melody from Beukes near the end consolidates the laidback and yet sophisticated vibe that Jits portrays not only with this track but with his persona and his music performances throughout most of his career thus far.
Jitsvinger himself is not merely a rap-artist but as a musician and an accomplished guitarist he features on a number of his own tracks, yet he is noticeably absent from the jazzy instrumentation on Graasies where a guitar would seem like a logical addition.
Once the overall soundscape of Graasies hits you it however starts to show up as a wise choice since that extra layer of a guitar would have perhaps detracted from the intended vibe of the production.
The newly released music video of Graasies plays into that feeling the track invokes and instead of bombarding us with images of the various settings and ways in which people wear their Graasies, it is simply just Jits, two dancers and a model filmed from dynamically cool angles on the steps and front façade of the Artscape Theatre.
Filmed and directed by Nic Leighton, the music video features dancers Yaeesh Camphor and Leticia Fisher and model Tania Peffer.
In “Grassies”, Jits highlights the aesthetics of street culture praising the older generation for laying the foundation through their dress-code while at the same time dismantling stereotypes associated with the shoe. Many believe it to be strictly a men’s shoe, worn by tomboys, worn as formal attire or associated stereotypically with gangsters.
However, a new breed of Graasies-wearing trendsetters: women and men are choosing it for its sophistication, comfort, elegance, simplicity and sense of community.
in his lyrics Jits also gives a shoutout to the manufacturers, by calling himself their unofficial ambassador.
Grasshoppers by Watson Shoes are still handmade the traditional way in the original 160 year old factory in the Southern Cape town of Groot Brakrivier.
WATCH Graasies - Jitsvinger [Official Music Video]


In his preferred Afrikaaps vernacular Jits who started his music career in the mid-90’s tells the story of how his older brother took him to buy his first pair of Graasies; how and when people wear Graasies, the landmark stores that sell Graasies and other street-wear, and tells a tale familiar to people who wear Graasies or may have just considered buying a pair.
“I always wanted to have my own pair of Grasshoppers since I was in primary school watching the older laaities wear it. It was the shoe the cool kids used to wear. It was what the ouens used to drape on the streets and in church, to work or just for uitlam. To put it simply, it is the symbol of self-awareness and sophistication that connects me to an era before Google!”

Jitsvinger se Graasies track met hom musiekvideo daarvan pas eintlik nca by die vibe en gevoel van cool and understated sophistication en as jy vir Jitsvinger êrens raakloop sal jy sien hom Graasies pas ook nca by hom.
His childhood dream to own a pair of Graasies has more than come true. His obsession with the brand and styling has turned into a lifestyle statement which is as much a reflection of his musical prowess as what his music is a reflection of his lifestyle.
Jitsvinger se number gaan maak dat somma baie mense wee’ vanooraf sal wil Graasies yak…
Ek oek.