The Good, The Bad & The Incorrigible Featured 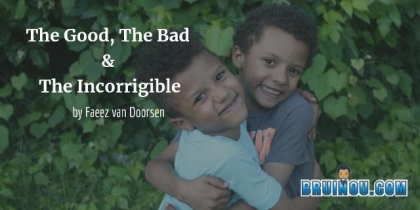 A family of seven, among them twin brothers,  have recently moved into the home opposite ours.
The pair are about six years old and at any time on the weekend you'll find them playing soccer with some of the other neighborhood kids.
But now the one twin is just one of those kids who steals the heart of everyone he makes contact with, despite running into people's gardens and destroying their gardens or stealing fruit from their trees or 'accidentally' throwing stones on their rooftops. He just has that kind of cherubic, forgivable face. The kind you respond to with, 'just don't do it again' after he's worked his charm on you.
Anyway, so late yesterday afternoon/ early evening he and two of his friends are doing their soccer thing, but they keep kicking the ball against our garage door, which is positioned right alongside my room.
After the third time it happens, I decide to confront them and they all point their fingers at him. As I call him close, the other boys scatter.
He draws near, his head tilted downward, his eyes as innocent as innocent can possibly be.
Before I can say anything, his voice cracks:
'I'm sorry uncle'.
My annoyance seeps away. I can't get angry with this kid, whose eyes are welling up now. I gently reprimand him and tell him it's okay, but if he keeps kicking the ball against the garage, it's gonna break, and I'm going to have to tell his father, who is going to have to pay a lot of money to fix it.
He garbles something I can't hear.  I ask him to repeat. He raises his voice slightly,
'My father is dead, uncle'.
My heart. If the eyes of a little cherub is capable of melting your heart with a solitary blink of pure innocence, Imagine learning that a kid like that losing a parent so young. And the dad was such a nice guy, too.
I'm not good with this sort of thing. I tell him I'm really sorry and say something along the lines of how be brave he must be now, especially for his mom.
At this point I see his twin calling out to him from one of the windows of their house to come home and I'm relieved because these kinds of conversations... Yoh... I can't.
His twin:
'What are you doing outside? You know you're not supposed to be outside Maghrieb time (after sunset). Daddy phoned and said he's gonna be home now, now!'
Jiree! Before I could even register a, 'What the actual...', this child had zipped across the street, jumped over his gate, literally dived into his house and banged the door behind him.
Tweet

Published in Kuk Funny!
Tagged under

More in this category: « Mistaken Identity and 'n Klomp Drama A Tollie in the Krismis Hamper? »