For 13 years, as long as Jade has been in school, that is for how long Ms Charlene Petersen of Valhalla Park Community Feeding Angels has been feeding needy members of her community.

Jade told a Daily Voice reporter "As a young girl, I’ve seen people queuing to get food, sad and hungry, and aunty Charlene would give as much as she can".

Jade asked her parents Russell & Dorothy if instead of paying for a fancy dress for the dance they would rather help her throw a party for Charlene Petersen attended by members of the community and whereby they could give her hero a gift of appreciation.

Her parents loved the idea and helped her plan the whole thing.

Jade also told some neighbours, relatives and community members of her idea to host a party at her home for Charlene Petersen and they were all willing to chip in.

On 1 December, the day that Jade finished her final exam paper, the Le Roux family invited the community, including Charlene, to celebrate with them.

Charlene was under the impression that she had been invited to deliver a speech before Jade would go off to enjoy her high-school dance, however, to her surprise, it was all about her.

“I just said to her, Aunty Charlene, this is for you as a token of our appreciation for all that you do for us in the community and it does not go unnoticed" Jade told News24.

It was an overwhelming moment for Charlene who has never before in her 13 years of running her community feeding program received any recognition whatsoever.

Among Charlene Petersen’s gifts was a large amount of groceries which the contributing community members intended specifically for Charlene's household and not for the community feeding program. A grateful Charlene adamantly vowed that should the need arise; she won't hesitate to use of those groceries to feed the needy. 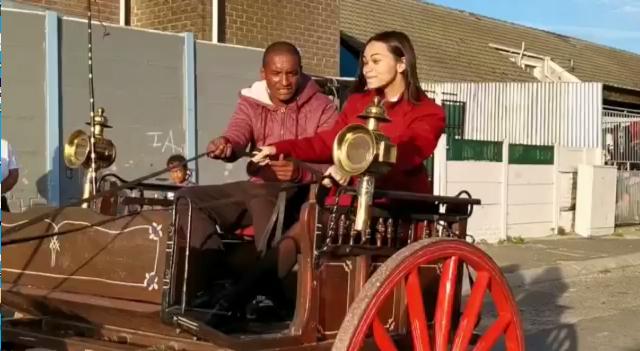 Though Jade le Roux had foregone the opportunity to prance around in a fancy ball gown, she did get to experience some royal treatment as she was driven around her community in a horse-drawn carriage to deliver food to needy people in her neighbourhood.

Jade told News24 that she was hoping Charlene would join her but the community hero refused because she was scared of the horse.

Jade is just happy that she was able to show Charlene how loved and appreciated she is.

"Her eyes sparkled with tears. It was worth it."