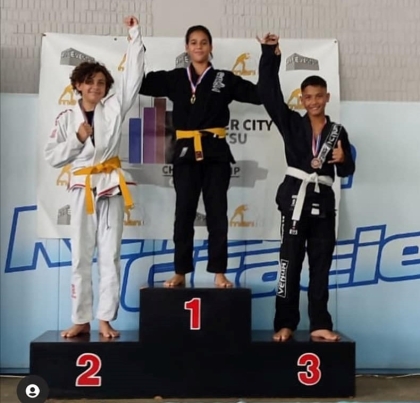 Nuha Shah (the one in the middle... Obviously) Needs Funds to get to the 2022 Youth IMMAF World Championship in Abu Dhabi Image Supplied
Tweet

A mere two months ago Nuha went for Western Province MMA trials where she was tested on her abilities. Soon after she received a message to say that she had been selected for the Western province MMA under 14 youth team.
She was the only girl who made the Western Province team to compete in Johannesburg where she was pitted against one of the best girls in Gauteng province and came out winning a gold medal.

The athletes who won gold and silver medals in Johannesburg were selected to represent South Africa and will be competing in the World Youth Championship in Abu Dhabi in August from the 17-20th.

Amidst all the celebrations of Nuha's selection, there are however some obstacles that need to be overcome.
Nuha's parents, Zaarah and Ghaalib Shah, have over the years made many sacrifices for Nuha's traveling to participate in her sport.

Zaarah explained that since Nuha's selection was announced on such short notice and she does not have any official sponsors, they have already started raising funds among family and friends, but are also appealing to the broader public for assistance.
"My husband and I are not financially ready to send her on another trip from our own pockets; therefore, we are pleading for any donations, big or small, as we need money for flights, accommodation, food and visas. Nuha doesn’t get any form of sponsorship."

"I will be doing one or two fundraisers, but we have very little time to raise funds."
"We only got final confirmation about the tour a week ago. This trip will cost a fortune, so we need all the help from anyone willing or able to assist Nuha in making her dreams come true."

"This is really a once-in-a-lifetime opportunity for her, and it would be highly appreciated if we could get any help."

Assisted by family friend Sam Grass, who plays a a major role in helping to raise awareness of Nuha's talent and her need for sponsorship, a Back-a-Buddy Fund has been set up to raise money for Nuha's trip to Abu Dhabi.
https://www.backabuddy.co.za/nuha-shah

For those who would like to contribute to sponsoring Nuha but are unable to use Back-a-Buddy or prefer not to use it, you may also deposit funds directly into the Bank Account created for Nuha.
Banking details
Acc Name: Miss Nuha Shah
Bank: Standard Bank
Acc Number : 10175466198
Branch Code : 026509
Acc Type : Current Account

We at Bruinou.com are super proud of Nuha's achievements thus far and we see in her a future world champion in at least one of her martial arts disciplines.
We fully agree with Sam Grass's sentiments when she says "Remember her name now so that when she becomes a world champ one day, you'll know that you've played a part in supporting a young local South African sports star in securing her future"

More in this category: « 48-hour Gang War in Wentworth Durban The high price of our daily bread »