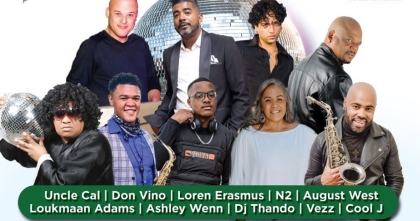 The Annual Band Aid Winter Blanket Drive for 2022 is already in full swing and stepping up multiple levels to bring Love and Warmth for many more beneficiaries than it ever did before.

With activities around the Band Aid Winter Blanket Drive's collection points for donations and distribution to beneficiaries already up and running, as with nearly all Band Aid SA initiatives, supporters can also look forward to gaining access to Exquisite Entertainment.

This time around the Band Aid Winter Blanket Drive incorporates the Blanket Drive City to City Tour which is an Event Tour that covers at least five confirmed towns and cities from Cape Town in the Western Cape to Gqeberha aka Port Elizabeth in the Eastern Cape.

Kicking off the Band Aid Winter Blanket Drive City to City Tour will be a Launch Event at Danté's Premiere Lounge in Bellville on 30 July 2022.
Uncle Cal has brought together a superb lineup of Musicians, DJ's & Entertainers that include Don Vino, Loren Erasmus, the band N2, August West, Loukmaan Adams, Ashley Wenn, DJ Thando, Vezz, Cool J and of course Uncle Cal himself.

Patrons are also in for a major treat with the first ever Live Performance of a brand new interpretation of the classic Never Never Never.
In what can only be described as another stroke of musical genius, DJ & Producer Uncle Cal brings together the warm angelic voice of Loren Erasmus with the saxophone brilliance of Don Vino to breathe new life into the Shirley Bassey classic Never Never Never.

Not only is this exciting news for music lovers and the respective fans of Uncle Cal, Loren Erasmus and Donvino, of which we are sure there is a huge overlap, supporters of The Band Aid Winter Blanket Drive are also in for a treat as the premiere performance and official release of the trio's rendition of Never Never Never is set to take place at the Blanket Drive's Launch Event at Danté's Premiere Lounge. Never Never Never is already playlisted on some radio stations including Heart 104.9 FM but we've already had a sneak peak and can promise that you that the Live Performance will blow you away.

Band Aid SA, which started out as an initiative that through fundraising and other financial interventions specifically provides medical finance and other financial support to musicians in need, has since developed a Social Interactive Component which stretches far beyond its original mandate of serving only those in the Arts & Culture sector.

Before its formal registration as an NPC in 2020, Band Aid SA has had a 15 year track record of financial interventions that help destitute musicians and artists, including ailing veteran musicians being provided with benevolent funding and financial assistance for burials.

Band Aid SA has since, through its Social Interactive Component, expanded to include interventions in the current socio economic crisis we find ourselves in and its primary function has evolved to operate as an NPC (Non Profit Company) to facilitate assistance in funding of; or making donations in kind to NGO’s and charity organisations.

The Covid-19 Lockdown which has lasted through 2020 up to 2022 has not only severely affected the largely informal Arts & Culture sector but has brought large scale suffering to many in the very communalities that musicians and artists are from.
Though the lockdown has been lifted, the impact on the poorest of the poor will continue for a long time to come.

Fortunately, the lifting of lockdown restrictions also opens up opportunities beyond the sphere of Streamed Online Fundraising Events which Band Aid SA & their partners have so successfully harnessed during the lockdown.
In combination with the Live Event aspects of the Band Aid Winter Blanket Drive, the organisation is also engaging with DJ’s and Artists in their bid to provide the destitute and needy some much needed protection from the harsh cold elements through their winter blanket drive. 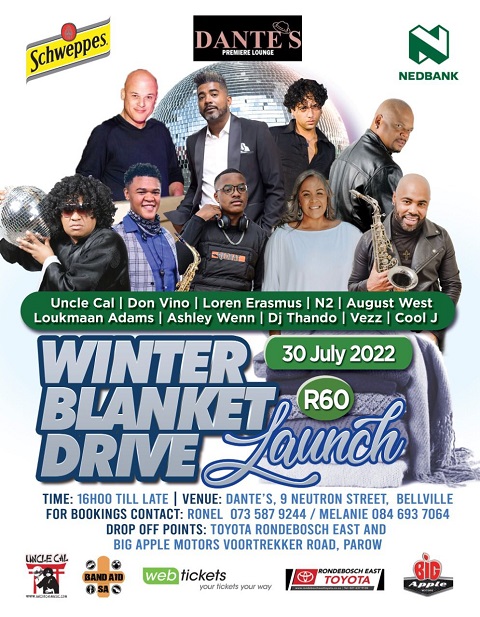 Afro Ninja DJ Uncle Cal who as an ambassador of the organisation is well known for spearheading many fundraising exploits with Band Aid SA is joining forces with fellow DJ’s and Musicians who will all be combining their live performance talent, the reach and influence of their social media networks and their access to resources to source donations for the Band Aid Winter Blanket Drive campaign.

The campaign acts as an interface to source and distribute the blankets along with non-perishable food items and other useful goods to NGO’s and Soup Kitchens that have been earmarked to benefit from Band Aid SA assisting them with feeding schemes in underprivileged communities.

Band Aid SA & Uncle Cal will collaborate with Local Musicians and DJ’s, NPO’s and Promoters in each of the cities or towns scheduled on the Blanket Drive City to City Tour.
Each city or town will have drop off points in the communities where people can drop off blankets and non-perishable foods to be handed out in those communities by Uncle Cal in conjunction with the NPO’s & NGO’s that Band Aid SA will engage in those cities & towns.

Patrons are requested to bring donations of blankets etc on the night of each of the events below.
Venues and lineups, as well as additional drop off points are to be confirmed closer to each date.
Should you wish to contribute to Band Aid SA’s initiative but you are unable to reach any of the events or drop off points, you are most welcome to make a monetary donation with the Reference as Blanket Drive.

Other Town and Cities to Be Announced Soon