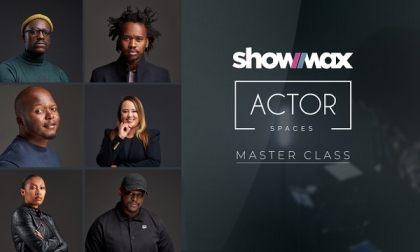 An invaluable resource for budding young actors, the online launch of the Actor Spaces Masterclasses on 11 August 2022 was met with much acclaim from those who have watched the premiere on YouTube and we at Bruinou.com were verily impressed by the first Masterclass on Character Development presented by Bonko Khoza.

Showmax and Actor Spaces are partnering to open up the industry, with new masterclasses coming to YouTube every second Thursday from August into October 2022. Each masterclass will be followed within a week by an Instagram Live for aspiring actors to ask the featured speaker follow-up questions.

“While acting is a talent, it’s also a skill that can be refined, and a business that must be learnt. So we’re excited to be partnering on these masterclasses with Actor Spaces and some of Mzansi’s favourite talents in front of the camera and behind it, to help develop the next Bonko Khozas and Bokang Phelanes.“
“Our Showmax Originals have shown that whenever you go looking for talent in South Africa, you find it,” says Nomsa Philiso, executive head: programming at MultiChoice.

“The collaboration and support from Showmax on the masterclasses speaks to the pillars of Actor Spaces: showcasing talent, bridging the accessibility gap, and our core of development,” says Actor Spaces’ founder and CEO Ayanda Sithebe.

The Wife’s Bonko Khoza on character development | Stream now on YouTube
Bonko Khoza is an actor who has performed in local and international work. He was nominated at both the DStv Mzansi Viewers’ Choice Awards and the 2022 SAFTAs for his breakthrough role as Mqhele in the Twitter-topping, record-breaking Showmax Original telenovela The Wife. He’ll kickstart the Showmax x Actor Spaces masterclasses by breaking down his character development process, which, in the build up to playing Mqhele Zulu, included waking up at 3am, wearing a prop gun, spending a lot of time at the taxi rank and smoking a lot...

Once you’ve watched his masterclass, join Bonko for his Instagram Live Q&A at https://instagram.com/actorspaces from 6-7pm on 18 August 2022.

Also look out for Khoza and co-star Mbalenhle Mavimbela talking through the ups and downs of Hlomu and Mqhele’s relationship in the first episode of The Wife: Behind The Veil, which launched on Showmax last week.

The Wife’s casting director Ayanda Sithebe on the art of auditioning | 25 August 2022
Has any casting ever been more hotly debated than The Wife? Ayanda Sithebe is the award-winning casting director who was tasked with finding the real-life equivalents of the much-loved characters in Dudu Busani-Dube’s bestselling books. In this masterclass, he breaks down his journey and process to finding the likes of Mbalenhle Mavimbela (Hlomu) and Gaisang K Noge (Naledi), 2022 DStv Mzansi Viewers’ Choice Award winners Abdul Khoza (Nqoba) and Kwenzo Ngcobo (Qhawe), and 2022 SAFTA Best Actor nominee Bonko Khoza (Mqhele). If you want to win similar roles, you won’t want to miss his tips here.

Mandla N (Meet Melusi, DiepCity) on authentic directing | 8 September
Mandla N is a renowned South African director, producer, actor, musician and entrepreneur. In his final year of university, he opened his own production company, BlackBrain Pictures, and together with some of his classmates, they produced their first hit comedy for SABC 1, City Ses’la, as well as the spinoff Ses’ Top La. Over the years, Mandla N successfully transitioned from acting and producing comedies to directing and producing award-winning dramas and movies, including DiepCity and Boxing Day, nominated for Best Telenovela and Best Made for TV Movie respectively at the 2022 SAFTAs, and Meet Melusi, which recently topped the Showmax movies chart. He will share his experiences on both sides of the camera, what drives his passion and how he creates authentic content.

Blood Psalms’ Thabo Rametsi on constructing the background to your roles | 22 September 2022
Thabo Rametsi was named Best Actor at the BRICS Film Festival as the lead in Kalushi: The Story of Solomon Mahlangu. He’s also received much praise as the lead in Silverton Siege and is one of many, many stars in the biggest series of his career yet: the epic upcoming Showmax Original fantasy Blood Psalms. Now moving into directing (including all the Showmax x Actor Spaces masterclasses), he’ll take a step back from acting to explain everything else that happens on a film set, and why it’s so important for actors to understand the wider context to their performances.

Blood Psalms’ co-creator Layla Swart on shooting local stories on a competitive international level |6 October 2022
Layla Swart, with Jahmil XT Qubeka, was responsible for South Africa’s 2020 Oscar entry Knuckle City. The boxing drama was the most awarded film at the 2020 SAFTAs, where it took home six awards, including Best Director for Qubeka and Best Editor for Swart, as well as the most nominated film at the 2020 Africa Movie Academy Awards, where it won two awards. Now, they’re finally ready to unveil Africa’s most ambitious series yet, Blood Psalms, and what it takes to shoot locally relevant stories for the competitive international stage.

Bokang Phelane on playing the lead in action-packed series Blood Psalms | 20 October 2022
Bokang Phelane has the role of a lifetime in Blood Psalms as Princess Zazi, daughter of the mad king Letsha; lover of General Toka, the head of the Akachi army; and pregnant with a child who is prophesied to summon the return of the gods. She’ll share her experiences playing the lead in a heavyweight cast, opposite SAFTA winners Bongile Mantsai, Hamilton Dlamini, Hlubi Mboya, Mothusi Magano, Siv Ngesi and Warren Masemola, as well as talking about just how intense being an action lead can be.


Who should follow these masterclasses?
Whether you're a novice thespian, an established actor, or just a movie and television fan, even just a fan of the featured actors themselves; no matter what language or cultural background you have, we at Bruinou.com believe that these masterclasses as proven by the first instalment in the video above will help you gain usefully important insights that normally comes at the cost of paying to attend a course at one of the top acting academies. 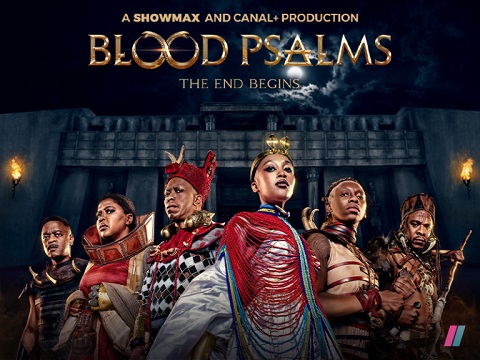 So why such a huge emphasis on those involved in Blood Psalms?

A brand new epic, action-packed African fantasy series, Blood Psalms has a star-studded cast of recent SAFTA winners and nominees as wells as Africa Movie Academy Awards winners and nominees.
Going by the recently dropped first official trailer, Blood Psalms seems to have brought out the best of their acticng abilities and could stand a huge chance of palming in a large number of nominations for the next round of television awards ceremonies.
Set in Ancient Africa, one thousand years after the fall of Atlantis, the five surviving houses of Kemet find themselves beset with fears of a prophesied end of days.
A co-production with CANAL+, Blood Psalms will premiere on Showmax on 28 September 2022.
Read all the details and Watch the Trailer of Blood Psalms on Actor Spaces

The teaching continues behind the scenes on the Showmax x Actor Spaces masterclasses, with each head of department entrusted with interns. “These were a mixture of graduates and students from the Actor Spaces workshops, with preference given to female, black and youth applicants,” says Sithebe. “In total, we brought 25 aspiring young actors and crew on board, assigning them to departments such as the director’s unit, the producers’ unit, and production design. By opening up the practical side of the industry, we believe that we have empowered these young creatives with skills and know-how to further their aspirations in our ever-growing sector.”

Actor Spaces is an organisation that highlights and celebrates excellence in the South African film, television and theatre industry, while documenting and archiving the stories of South African actors, which also aids in creating and maintaining a digital footprint.

The brand allows for the development and appreciation of the craft, which extends to accessibility, info sharing platforms, workshops and masterclass, especially for the previously disadvantaged.

More in this category: « Making Beats to Fight The Beast at Exciting New Monthly BPM Event The Tales of Robyn Strangehood - Performance Poetry to Intrigue & Entertertain »