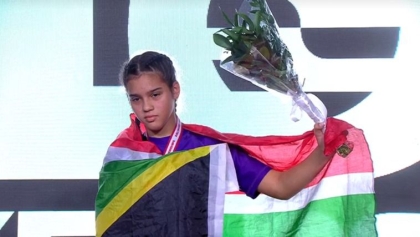 Nuha Shah has become the first South African to win a Gold medal in the MMA Youth World Championships with her victory in the Female Youth B 48 kg (106 lbs) division on Thursday 18 August.

Just over a month ago we were excited to tell you about Nuha from Grassy Park in Cape Town representing South Africa at the IMMAF Youth World MMA Championship in Abu Dhabi and her need to raise fumds for the trip.
Now she is Our World Champ!

After beating Asia Rialmo of the USA in the semi final, Nuha clinched gold by defeating India's Praggya P Khaniker in the final.

What makes Nuha's achievement all the more amazing is that though she has been learning MMA for anout 3 years now, she only started competitively participating in MMA a few months ago. She recently made the switch to conpeting in MMA after being an SA & All Africa Jiu-Jitsu champion in her division for a number of years in a row.

It was a mere three months ago that she went for Western Province MMA trials where she was tested on her abilities. Soon after she received a message to say that she had been selected for the Western province MMA under 14 youth team.
She was the only girl who made the Western Province team to compete in Johannesburg where she was pitted against one of the best girls in Gauteng province and came out winning a gold medal.

The athletes who won gold and silver medals in Johannesburg were selected to represent South Africa and will be competing in the World Youth Championship in Abu Dhabi in August from the 17-20th.

You can read our July article about her road to the championship here--> https://www.bruinou.com/aweh/latest-news/item/13095-young-jiu-jitsu-mma-star-nuha-shah-to-compete-in-abu-dhabi-world-champs

Congratulations Nuha. We at Bruinou.com are super proud of you.
Thanks to her dad Ghaalib for keeping us updated directly from the tournament in Abu Dhabi.

Published in In the news