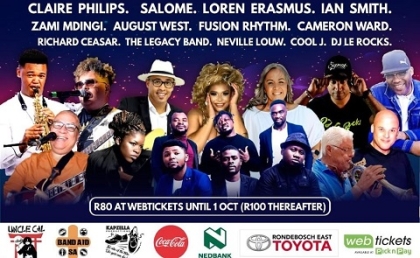 The Live Performances
The SAMA-winning singer and guitarist Claire Phillips needs no introduction. With her ability to straddle various genres with a fluency that is uniquely her own, and having fans across a broad spectrum of musical tastes, Claire Phillips will definitely be a star attraction at the Birthday Bash.

The Nightingale from Paarl, Loren Erasmus who currently features along with Don Vino on Uncle Cal’s radio hit, the remake of the Shirley Bassey classic Never Never Never, will also be performing some of her favourites from all of her recent events with Uncle Cal.

With a growing following of fans young and old, and being a regular feature on Uncle Cal’s events, August West will once again blow minds with his saxophone skills. It is great having one of those younger artists who makes Cape Jazz appealing to younger music lovers.

Trumpeting maestro Ian Smith, most famous for his stint with the iconic Virtual Jazz Reality, has one of the most influential music careers in Cape Town. His charisma, stage presence and ability to rock a crowd makes him a welcome addition to any Uncle Cal event.

Richard Ceasar is arguably one of Cape Town’s consistently most internationally traveled musicians. The vocalist and guitarist literally performs all over the world, so we can only count ourselves lucky that he’s back on home soil for Uncle Cal’s Birthday Bash.

Zami ‘Zamstar’ Mdingi the acclaimed lead singer of Coda, Jazzimandi, having a veritable arm's length list of various collaborations with some of SA’s top musicians & producers is another delightful addition to the lineup.

WATCH: Salome Performs It's Complicated on The Expresso Show

Salomé, a perennial favourite among South African audiences with regular appearances on national TV, famed for her hits What I do Best & I Don’t Want to Know, is still riding the cusp of her 2020 album with her self-composed title track It’s Complicated has on many occasions honoured Uncle Cal and his audiences. On 8 October 2022 Salomé will once again be doing what she does best at Danté’s Premiere Lounge.

Cameron Ward is highly regarded amongst the world’s most renowned jazz guitarists and rose to fame traveling the world as the guitarist in the band of the Legendary Hugh Masakela since he was merely 21 years old. Now in his 30’s, this seasoned international performer will definitely be a crowd pleaser at Uncle Cal’s Birthday Bash.

Many of the solo artists on the lineup will be accompanied by The Legacy Band, a group of stalwart musicians from the Cape Town scene who were brought together for this special occasion.

Rounding off the live musicians lineup is the band Fusion Rhythm. The Afro-Fusion band of Congolese expats put up a great performance at Uncle Cal’s 2020 Matroosfontein Jazz Reunion and they are clearly in touch with what Cape Town crowds love.

The DJ’s
Naturally an Uncle Cal event seldom happens without him hitting the decks and even at times joining the musicians with one or other percussive instrument. The Musical Kung Fu Master will be showing the crowd some of his legendary DJ moves at his Birthday Bash.

Filling up the dance floor along with Uncle Cal will be DJ Cool J. Often featuring at some of the top Jazz & Funk venues, DJ Cool J also regularly works with some of the top live performing artists at their events across Cape Town.
Also joining the DJ Lineup will be DJ Le Rocks, a sought after club DJ who regularly features on Cape Town radio shows along with DJ Neville Louw from Paarl famous for his residencies at Peter’s Cellars & Lantern Inn,

The Social Impact
What has become a staple of most of his events, The Afro Ninja DJ Uncle Cal, as a custodian of the Band Aid SA NPC, will tie his Birthday Bash to a charitable initiative.
As a follow up to the 2022 Band Aid SA Winter Blanket Drive spearheaded by Uncle Cal, with your help, The Afro Ninja will be giving back to the community through Calla's Foundation, The Soli Philander Foundation and Jenny Lucas Foundation which are NGO’s involved in poverty alleviation in communities across the Cape Peninsula.

Patrons are requested to bring along non-perishable food items to Uncle Cal’s Birthday Bash which will be distributed to the aforementioned NGO’s as well as a few soup kitchens.
Of course, as always, anyone who would like to donate but is unable to attend the Birthday Bash is still welcome to do so.

Back to the Future
Not only will you be celebrating Uncle Cal’s Birthday and contributing to a great cause, the coinciding Launch of The 2022 Jazz On The Lawn will take you on a trip into the future.
The launch will be an awesome preview of 10 & 11 December 2022 when after an absence of a whole decade we’ll see the return of the jazz festival that innovatively celebrates Cape Town’s own musicians in a way that is accessible to people of the communities that most of these musicians are from.

To join in on all of the fun at Uncle Cal’s Birthday Bash on Saturday 8 October 2022 at Danté’s Premiere Lounge in Bellville, get your Pre-Sold Tickets Now at Only R80 pp through any one of the following purchase methods.

Tickets can be bought via Webtickets or via Direct EFT Purchase from Unce Cal Entertainment.
Webtickets
https://www.webtickets.co.za/v2/event.aspx?itemid=1518322864