The series coproduced by MNet & Freemante is distributed globally by Fremantle and in 2021 received rave reviews when on 18 June 2021 Reyka opened the 60th Monte-Carlo Television Festival with its worldwide first episode screening in Monaco.

The show that has indeed gone on to enthrall Southern African MNet viewers along with viewers across the globe, is now also available to viewers across South Africa and the rest of Africa on the Showmax streaming service.

Kim Engelbrecht’s ability to play an intense complex character is a huge part of what makes Reyka a riveting story.
Having been abducted as a child by a farmer named Speelman (Iain Glen - Game of Thrones), Reyka is traumatised by the experience but this also helps her enter the minds of Africa's most notorious criminals and turn them inside out. Manipulative and charming, his hold on Reyka, 20 years later, forms part of the backbone of the story, as does Reyka’s relationship with her mother Elsa, played by Anna-Mart van der Merwe (Binnelanders, Kanarie and Poppie Nongena).

Kim Englebrecht, Iain Glen and Anna-Mart van der Merwe along with the young rising star Gabrielle de Gama who plays the younger Reyka Gama, are joined by a cast of some of South Africa’s best actors who all add to what makes Reyka worthy of its 4 SAFTA awards and its Emmy nominations.

Kim Enegelbrecht is of course ecstatic about the Emmy nominations.
"This nomination means so much more than you could ever imagine,” says Engelbrecht, who’s also had roles in series like Raised By Wolves and The Flash since making her name and winning her first SAFTA as Lolly in Isidingo. “This serves as validation to our entire Reyka team that hard work and commitment does not go unnoticed. Congratulations Team Reyka. I saw a quote this morning: ‘You can get to where you want to go from exactly where you are.’ Thank you to the International Emmys for the incredible nomination. Thank you for the opportunity to share our show with the world. South Africa has so many stories to tell."

Kim's international career has been growing in leaps and bounds over the past few years and we've previously brought you news about her roles in The Flash, Reyka and Ridley Scott's Raised By Wolves.

The 2022 Internatioal Emmy Awards will take place in New York on Monday 21 November 2022. 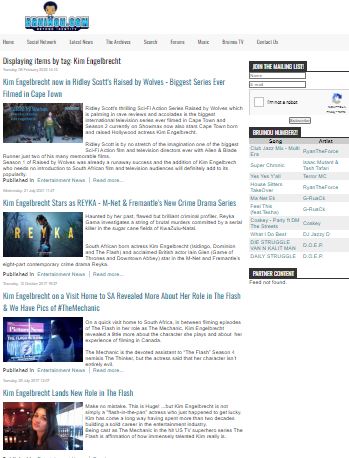