Brandon Benjamin, the first POC to be crowned SA Surfing Champion battles to get sponsorship 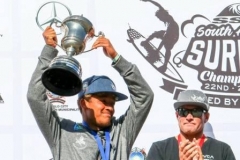