This warrior of urban culture who lives in Woodstock just outside the city centre of Cape Town is equally at home delivering lectures at universities on the relationship between urban culture, Hip Hop and the diversity of our society and alternatively spending time working in the bushveld for a Wilderness Public Benefit Organisation.
When she is not doing either of the two or living out her passion for working with youth, especially those of her home town Elsies River, putting on quarterly park jams for the children of the community, then she is working really hard at creating trend-setting Hip Hop coupled with video shoots and live performances.

I first met DSJ on one of her music video shoots around March 2015 and the first thing that was abundantly clear about her was that she is very industrious with a highly professional approach, while still being able to genuinely have fun with the whole process.
What was amazing was that instead of us all just packing up after a full day of filming in an area called The Range, she and Billa B, who is one of her regular collaborators, with me as their DJ, gave the crowd who had gathered an impromptu live show performing at least three full songs and some freestyles. What an exciting way of saying thank you to the people from one of her old neighbourhoods who warm-heartedly supported her through the inconvenience of having a film crew and a convoy of cars repeatedly riding through their area, and of course the loud music.
Some of the locals even volunteered to help and some were spontaneously being roped in as extras.
One of the songs she performed that day with Billa B called Bumping also featuring Janeli, has just been released as a Free Download which you can listen to  at the end of the article on page two.

Her interest in Hip Hop and the performing arts began at around the age of 12 when she started teaching herself to play the guitar.
"Around the same time, I started writing poetry. I had just discovered Maya Angelou and wanted to be just like her."
"Eventually I got the idea to marry the two. I first did a drag king act for a while where I rapped but then I decided to leave that and become a solo artist in my own right." 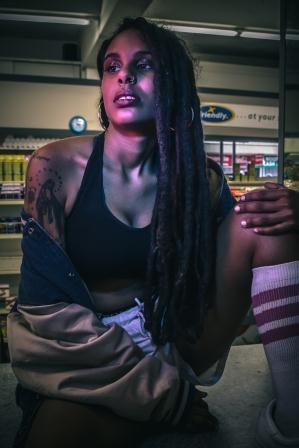 On her influences DSJ says: "Many people played a huge role in my development, most importantly my parents. They were community workers and selfless people who did all that they could to ensure that I had a great upbringing."
"I read a lot as a child and took a really keen interest in history. I loved reading about South African leaders like Sol Plaatjie, Autshumato aka Harry Die Strandlooper, Steve Biko, Shaka Zulu, Nandi Senzagakona, Saartjie Baartman, Nelson Mandela and so on. I remember feeling really motivated and inspired by what they did and stood for."
I then discovered music at age 12 and fell in love with the likes of Tracy Chapman, Lauryn Hill, Janet Jackson, Tupac Shakur and various other musicians. All of these figures greatly influenced me."

There is quite a lot of interest not only in the cutting edge subjects she addresses in her lyrics but also in the easy and comfortable way she floats between dialects and making it her own, with a few choice Cape expletives thrown in, but it's not because of a lack of vocabulary.
Sy vloek en partykeer sommer lelik ook, maar dit maak sin in die konteks van die res van wat sy probeer oordra.

We at bruinou.com asked her how it came about that she could so easily float between dialects and particularly her use of Gayle which is the covert counter-culture language developed by gay people in the Coloured community of the Cape Flats during the 1950's. It spread all over the country  and has evolved ever since to a point where many straight people are now aware of the meanings of some of the words used, and even use some Gayle terms in their everyday conversations.
It is definitely working for DSJ but we wanted to know if she started out rapping like that or whether it was an evolution or a conscious decision.
"It is honestly a result of my life experience. For the later part of my life I went to fancy schools where it benefited me to have a certain type of accent but back home, I would speak differently. I think this is something a lot of people have to navigate."
"Then I picked up Gayle, from hanging around queer Coloured people in Cape Town. I also picked up Afrikaaps from hanging around rappers from the Cape Flats. My ability to quickly pick up language has shown itself in my lyrics. I enjoy it and it is very natural for me to speak that way."

There is certainly a high sense of identity politics in her lyrics from both the effects of past racial classifications and self-identification as well as a sense of sexual identity which is unashamedly quite queer but with a slight dash of sexual ambiguity thrown in in such a way that her songs will grab the attention of everyone irrespective of their orientation.
We asked her if this is purposeful or if it's simply just a natural extension of her personality.
"It is natural and purposeful. I naturally am very aware of my identity in South Africa, as I think most of us are."
"I am naturally interested in these things so I purposefully talk about it in my music, because my music feels pointless to me if I don’t talk about the things that are important to me."
DSJ is brazenly challenging the norms but we wanted to know how she would identify herself according to South African societal norms.
"Well, I don’t know for sure. I like to imagine that I am many things and I dislike how limiting a label can be."
"It is however important that I identify myself as South African, though I am a citizen of the world.
"I am Black even though I am Coloured too."


We said she is brazen and daring and one of her latest releases #BrownBaas is exactly that, causing quite a stir. Not only does she challenge the socio-economic status quo in our country which no one can deny is still structured around the colour of our skins but she has no qualms in re-appropriating the K-word.

"I am clever undercover, nigga got it from her mother
Yes, you better raak wys want sy’s a slim f@kk#n k@ff%r"

Click ''Next" to read more about DSJ re-appropriating the K-word, about her future plans and also get more of her videos and music downloads...